“Blessed is the season which engages the whole world in a conspiracy of love.” —Hamilton Wright Mabie 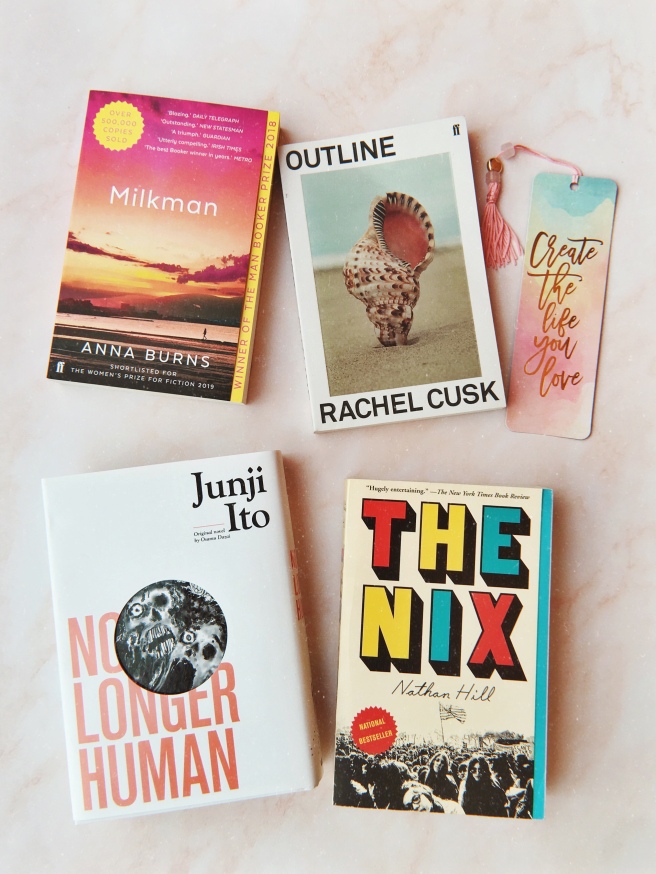 Hi, everyone! I hope you’re all enjoying the holidays. Today I’m sharing the books I got for Christmas 🎁 I wanted to post this sooner, but my son and I got colds and sore throat the past couple of days. We’re both getting better, just in time to welcome 2020.

I have my husband to thank for always indulging me and my endless wish list (not only during Christmas but all year round). He has given up trying to surprise me with random books because he can never guess which titles I would buy. However, when it comes to graphic novels it’s always his decision. He knows which are the best ones to get for our collection.

I chose a mixture of backlist and new releases for this haul. I’ve always wanted Milkman ever since it was announced winner of the Man Booker Prize, Outline I found through #bookstagram recommendations, No Longer Human is the latest from my favorite Junji Ito, and The Nix I’ve been seeing in bookstores and I just fell in love with the cover (promising plot, too!)

Read on if you want to know more about each title:

In this unnamed city, to be interesting is dangerous. Middle sister, our protagonist, is busy attempting to keep her mother from discovering her maybe-boyfriend and to keep everyone in the dark about her encounter with Milkman. But when first brother-in-law sniffs out her struggle, and rumours start to swell, middle sister becomes ‘interesting’. The last thing she ever wanted to be. To be interesting is to be noticed and to be noticed is dangerous.

Milkman is a tale of gossip and hearsay, silence and deliberate deafness. It is the story of inaction with enormous consequences.

A woman writer goes to Athens in the height of summer to teach a writing course. Though her own circumstances remain indistinct, she becomes the audience to a chain of narratives, as the people she meets tell her one after another the stories of their lives.

Beginning with the neighbouring passenger on the flight out and his tales of fast boats and failed marriages, the storytellers talk of their loves and ambitions and pains, their anxieties, their perceptions and daily lives. In the stifling heat and noise of the city the sequence of voice begins to weave a complex human tapestry. The more they talk the more elliptical their listener becomes, as she shapes and directs their accounts until certain themes begin to emerge: the experience of loss, the nature of family life, the difficulty of intimacy and the mystery of creativity itself.

Outline is a novel about writing and talking, about self-effacement and self-expression, about the desire to create and the human art of self-portraiture in which that desire finds its universal form.

No Longer Human by Osamu Dazai, adapted by Junji Ito

Nothing can surpass the terror of the human psyche.

Mine has been a life of much shame.

I can’t even guess myself what it must be to live the life of a human being.

Plagued by a maddening anxiety, the terrible disconnect between his own concept of happiness and the joy of the rest of the world, Yozo Oba plays the clown in his dissolute life, holding up a mask for those around him as he spirals ever downward, locked arm-in-arm with death.

Osamu Dazai’s immortal and supposedly autobiographical work of Japanese literature, is perfectly adapted here into a manga by Junji Ito. The imagery wrenches open the text of the novel one line at a time to sublimate Yozo’s mental landscape into something even more delicate and grotesque. This is the ultimate in art by Ito, proof that nothing can surpass the terror of the human psyche.

The Nix by Nathan Hill

A hilarious and deeply touching debut novel about a son, the mother who left him as a child, and how his search to uncover the secrets of her life leads him to reclaim his own.

Meet Samuel Andresen-Anderson: stalled writer, bored teacher at a local college, obsessive player of an online video game. He hasn’t seen his mother, Faye, since she walked out when he was a child. But then one day there she is, all over the news, throwing rocks at a presidential candidate. The media paints Faye as a militant radical with a sordid past, but as far as Samuel knows, his mother never left her small Iowa town. Which version of his mother is the true one? Determined to solve the puzzle–and finally have something to deliver to his publisher–Samuel decides to capitalize on his mother’s new fame by writing a tell-all biography, a book that will savage her intimately, publicly. But first, he has to locate her; and second, to talk to her without bursting into tears.

As Samuel begins to excavate her history, the story moves from the rural Midwest of the 1960s to New York City during the Great Recession and Occupy Wall Street to the infamous riots at the 1968 Chicago Democratic National Convention, and finally to Norway, home of the mysterious Nix that his mother told him about as a child. And in these places, Samuel will unexpectedly find that he has to rethink everything he ever knew about his mother–a woman with an epic story of her own, a story she kept hidden from the world.

Lastly, a good friend gifted me with a subscription to Fully Booked Fresh Read, a new offering from a local bookstore. It’s like Book Of The Month but the book that will be sent monthly will be a surprise–we can only pick the genre. I picked Fiction, of course.

The subscription will also come with additional content such as discussion guides, author Q&A, etc. If you want to know more about this new service, you may visit their website here.

That’s it for my Christmas haul! It really is the most wonderful time of the year 🎄 I hope you found something interesting from my haul. Did you get any bookish presents, or did you get anything for yourself? Enjoy the rest of the holidays and have fun in the coming New Year celebrations 🎉

One last reminder before I let you go: 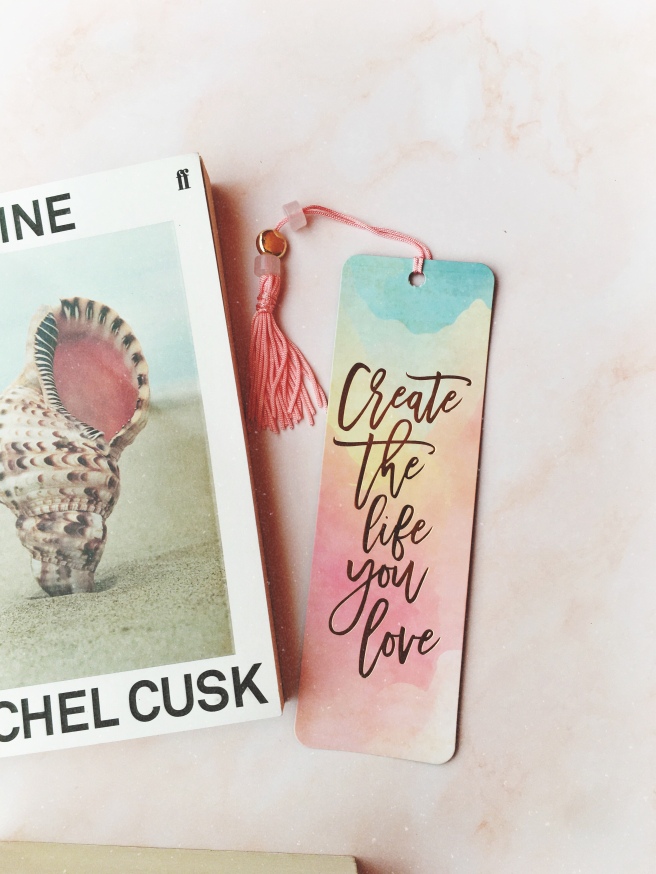 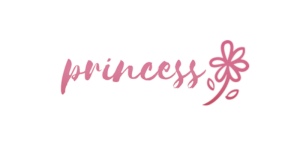 ★ BAD FRUIT ★⁣
❀ NOVEMBER BOOK NOTES ❀ ⁣
NOVEMBER READS RATED: ⁣⁣⁣
We try to do things differently but we always end up with books >> ramen >> pretzels 📚🍜🥨⁣
Only a few books have ever attempted to explore what it means to be a woman in all its forms and functions and succeed in the way that Mieko Kawakami did in Breasts and Eggs. This was an intense meditation on womanhood, motherhood and reproduction ⚠️TW child abuse, sexual harassment, commentaries on pregnancy and infertility ⁣
The husband and I have been enjoying Guillermo del Toro's Cabinet of Curiosities on Netflix so I asked him to unearth his copy of Necronomicon for me 🖤 ⁣
My Tweets 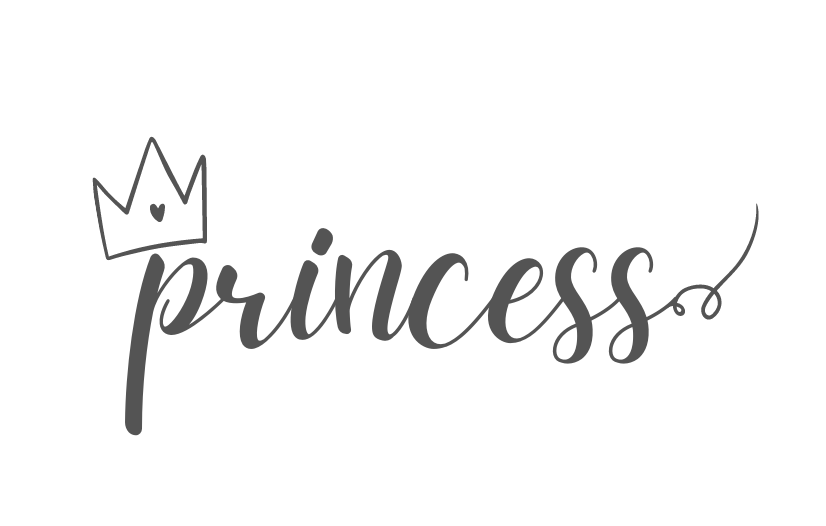